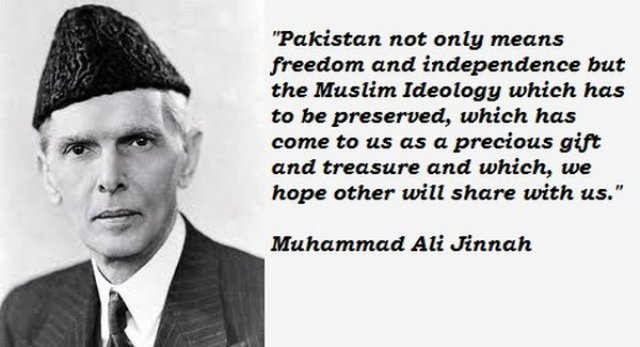 Here are the best of the best 32 Muhammad Ali Jinnah Sayings, read and enjoy your day and see Quaid was of which caliber. Quaid e Azam was great…

“I do not believe in taking the right decision, I take a decision and make it right.”

“There are two powers in the world; one is the sword and the other is the pen. There is a great competition and rivalry between the two. There is a third power stronger than both, that of the women.”

“Think a hundred times before you take a decision, but once that decision is taken, stand by it as one man.”

“Expect the best, prepare for the worst.”

“Democracy is in the blood of the Muslims, who look upon complete equality of mankind, and believe in fraternity, equality, and liberty.”

“No nation can rise to the height of glory unless your women are side by side with you. We are victims of evil customs. It is a crime against humanity that our women are shut up within the four walls of the houses as prisoners. There is no sanction anywhere for the deplorable condition in which our women have to live.”

“You will have to make up for the smallness of your size by your courage and selfless devotion to duty, for it is not life that matters, but the courage, fortitude, and determination you bring to it.”

“With faith, discipline, and selfless devotion to duty, there is nothing worthwhile that you cannot achieve.”

“No nation can ever be worthy of its existence that cannot take its women along with the men. No struggle can ever succeed without women participating side by side with men. There are two powers in the world; one is the sword and the other is the pen. There is a great competition and rivalry between the two. There is a third power stronger than both, that of the women.”

“India is not a nation, nor a country. It is a subcontinent of nationalities.”

“The great majority of us are Muslims. We follow the teachings of the Prophet Mohammed (may peace be upon him). We are members of the brotherhood of Islam in which all are equal in rights, dignity, and self-respect. Consequently, we have a special and very deep sense of unity. But make no mistake: Pakistan is not a theocracy or anything like it.”

“Do not forget that the armed forces are the servants of the people. You do not make national policy; it is we, the civilians, who decide these issues and it is your duty to carry out these tasks with which you are entrusted.”

“We have undoubtedly achieved Pakistan, and that too without bloody war, practically peacefully, by moral and intellectual force, and with the power of the pen, which is no less mighty than that of the sword and so our righteous cause has triumphed. Are we now going to besmear and tarnish this greatest achievement for which there is no parallel in the history of the world? Pakistan is now a fait accompli and it can never be undone, besides, it was the only just, honorable, and practical solution of the most complex constitutional problem of this great subcontinent. Let us now plan to build and reconstruct and regenerate our great nation…”

“Any idea of a United India could never have worked and in my judgment, it would have led us to terrific disaster.”

“Islam expect every Muslim to do this duty, and if we realize our responsibility time will come soon when we shall justify ourselves worthy of a glorious past.”

“Pakistan not only means freedom and independence but the Muslim Ideology which has to be preserved, which has come to us as a precious gift and treasure and which, we hope other will share with us.”

“I have nothing to do with this pseudo-religious approach that Gandhi is advocating.”

“I sincerely hope that they (relations between India and Pakistan) will be friendly and cordial. We have a great deal to do…and think that we can be of use to each other and to the world.”

“No nation can rise to the height of glory unless your women are side by side with you.”

“The press is great power and it can do good as well as harm. If rightly conducted it can guide and instruct public opinion. Talk with journalists of Kashmir 23/4/1944”

“Come forward as servants of Islam, organize the people economically, socially, educationally, and politically and I am sure that you will be a power that will be accepted by everybody.”

“Failure is a word unknown to me.”

“You have to stand guard over the development and maintenance of Islamic democracy, Islamic social justice, and the equality of manhood in your own native soil.”

“No settlement with the majority is possible as no Hindu leader speaking with any authority shows any concern or genuine desire for it.”

“We should have a State in which we could live and breathe as free men and which we could develop according to our own lights and culture and where principles of Islamic social justice could find free play.”

“My message to you all is of hope, courage, and confidence.”

“My message to you all is of hope, courage, and confidence. Let us mobilize all our resources in a systematic and organized way and tackle the grave issues that confront us with the grim determination and discipline worthy of a great nation.”

“When Mrs. Jinnah feels cold, she will say so, and ask for a wrap herself.”

“with faith, discipline, and selfless devotion to the duty, there is nothing worthwhile that you cannot achieve.”